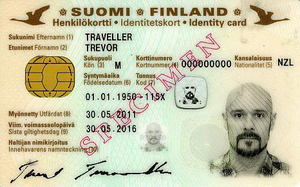 The scheme, to go into effect from 1 June, aims to make it easier for border guards and police to distinguish individuals. Colour-coding existed previously, with the two cards a light blue and light pink respectively, but, according to the National Police, it was not easy for authorities to make the distinction. Minors are also now to be given purple ID cards.

While the blue cards used by adult Finns can also be employed as a travel document throughout the EU and Nordic countries instead of a passport, the brown, foreigner card may not.